In our #MuseumFromHome series, this week’s feature of our #BuiltTraditionThursday is the Capilla de San Pancracio (Chapel of St. Pancratius), colloquially known as the Old La Loma Cemetery Chapel, in the Camposanto de La Loma (La Loma Cemetery) in Caloocan City. This declared cultural treasure is one of Manila’s oldest standing structures, with the 19th century chapel along with the cemetery in which it resides having survived the devastation wrought on the capital during World War II, which mournfully razed many of Old Manila’s architecture. The Capilla de San Pancracio traces its origins to August 30, 1864, when the Spanish colonial government of the Philippines approved the establishment of a new cementerio general to mitigate the lack of space in the Paco Cemetery and to accommodate the growing population of Manila and its vicinities (Ramos, 2019). This proposed new cemetery would become the Camposanto de La Loma in 1884, wherein the Capilla stands (Ramos, 2019). The Capilla and its site and setting are notable for surviving the infrastructural destruction brought about by the 1945 Battle of Manila in World War II, thus becoming the oldest extant funerary chapel and cemetery grounds in Manila (NMP, 2017). 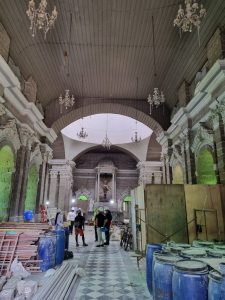 Architecturally, the Capilla is a single storeybuilding, located at the Southern side of the La Loma Cemetery. The structure has a building foot print of around four hundred and eighty-five (485) square meters, oriented on a generally north-south axis with a slight tilt to the northeast. It measures thirty-seven and six-tenths (37.60) meters in length and twelve and six-tenths (12.60) meters in width. The Capilla is cruciform in plan, with slight transepts found in the upper/further section of the shaft, in the Latin-cross configuration. In accordance with typical early Christian church architecture found in the country, the plan is laid out with a long, simple, single nave, enhanced by an octagonal dome over the crossing. The sanctuary and main altarpieces are at the end of the nave, and directly behind is the sacristy. The architectural interior also features a series of four sweeping arches which support the dome and bounds the intersection of the nave and transepts (Jose, 1991). 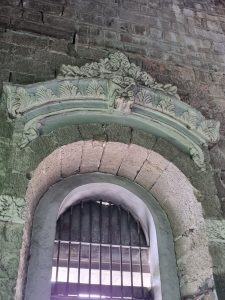 In terms of structure, the Capilla is made primarily of adobe (or volcanic tuff) blocks, cut and formed. The main walls are supported externally by massive stone buttresses characteristic of Philippine colonial church architecture as a measure to withstand earthquakes and raids (Jose, 1991), with each buttress alternating with large windows to allow light to enter the aisle and transepts. The Capilla is also furnished with intricate and detailed ornamentation, with elaborate detailing on its main door, and adorning its fenestration and cornices. It also features a metal gate of curly grillwork flanked by two white-painted lion statues, while on both sides of the façade are statues of two saints. The Capilla de San Pancracio is in a relatively fair state of conservation and maintenance despite its long disuse. There is overgrowth and vegetation present along most of its edifices, but the structure of the chapel remains enduring, with only a minimal area of its stone construction showing signs of wear. The extant carved ornamentations in the interior and exterior of the chapel, distinct in the structure, also remain in good condition. While there were interventions introduced to the property, such as the addition of toilet facilities abutting the northeastern façade, these were found to be reversible and have since been removed. 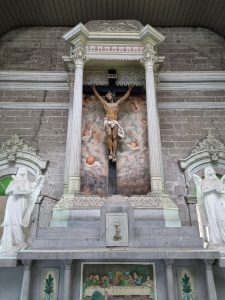 Owing to its survival of the destruction of the Battle of Manila in 1945 and all the numerous calamities that came before and after it that shook the capital to its foundations, the Capilla de San Pancracio is a crucial, enduring remnant of a bygone era of the country’s architectural cultural heritage. In recognition of the building’s significance, the chapel was declared a National Cultural Treasure by the National Museum of the Philippines in 2017, and is currently undergoing restoration and preservation efforts through a partnership of the Diocese of Caloocan and the Escuella Taller de Filipinas Foundation, to retain the Capilla’s intrinsic glory for future generations (Adel, 2021).